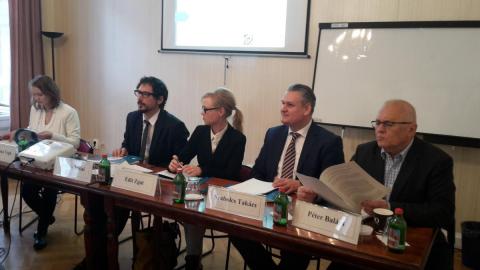 What has been the biggest success and failure of Hungary’s foreign policy since the EU accession? What do Hungarian foreign policy stakeholder think about the Visegrad cooperation 25 years after its foundation? How do they see the future of the EU and that of the transatlantic alliance? What will be on the top of the European foreign policy agenda in the coming years?

Discussing the result of an international survey conducted in the framework of the “Trends of Visegrad Foreign Policy 2015” research project, the panel discussion entitled "What do Hungarian foreign policy stakeholders think?" and held on November 24, 2015, at the Central European University, sought to provide answer to the above questions with the participation of State Secretary Szabolcs Takács, CENS Director Péter Balázs, Political Capital's analyst Edit Zgut, and CENS reseach fellow Zsuzsanna Végh. The discussion was chaired by CENS research fellow András Szalai.

According to the results of the survey, Germany, the United States, Russia, Poland and China are the countries Hungarian foreign policy stakeholders (politicians, civil servants, experts and analysts, business(wo)men and journalists) name most frequently as Hungary's key international partners, whereas they consider V4 partners Czech Republic and Slovakia of lesser importance for the country's external relations. They anticipate energy and security-related issues to be high on Hungary's foreign policy agenda in the coming years, and expect the EU to have these on the table along with key economic issues (global comptetitiveness and the single market) on the table until 2020 as well. Hungarian stakeholders think that the EU will develop more along the lines of what the large member states wish, and expect an EU to evolve toward having stronger supranational elements and less multi-speed ones in the coming decade. They see the EU as a beneficial framework for international cooperation and generally perceive Hungary's main foreign policy successes and failures in a European context as well. While there are disagreements and different priorities among the Visegrad countries, Hungarian stakeholders generally consider the Visegrad Group as an important, beneficial and constructive platform within the EU, the influence of which, however, is questioned. Against this background, stakeholders would wish to see the cooperation strengthened (albeit not necessarily through institutionalization) and its scope potentially broadened. Among current areas of cooperation, the involvement in and with the Western Balkans is evaluated relatively successful, along with the area of cultural and educational cooperation. Despite this, Hungarians did not list the Balkan-focus as an important area of future cooperation. In line with the expectations with regards to the national and European policy agenda, they call for more attention to cooperation on energy policy on the regional level as well.

The goal of the research project was to map the views held on foreign policy in the Visegrad states by those who make, influence, implement and interpret it. The assessment was done in a comparative manner in order to seek out similarities and differences among the four countries elites and to formulate recommendations with regards to the future direction of policy cooperation within the V4. The surveys findings are available on the website "Trends of Visegrad Foreign Policy" where a comparative study and visulatizations present the results.

The research was led by the Association for International Affairs (AMO, Prague) and implemented in cooperation with the Central European Policy Institute (CEPI, Bratislava), the CEU Center for EU Enlargement Studies (CENS, Budapest) and the Institute of Public Affairs (ISP, Warsaw). The project was supported by the Konrad Adenauer Foundation, the Open Society Foundations and the Ministry of Foreign Affairs of the Czech Republic.