Event Report: 2018 Bosnian Elections and the Electoral Framework of the Dayton Peace Accords 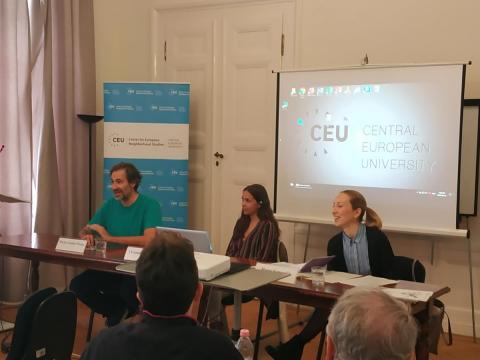 The purpose of the event was to present Ms. Karppi’s policy paper of the same title, which has recently been published through CENS. The paper discusses the outcomes of the most recent elections in Bosnia and Herzegovina, and critically examines power-sharing structures in the Dayton Peace Accords. The presentation began with an introduction by CENS Western Balkans Researcher Hana Semanic, who introduced the paper and the two panelists.

Professor Prelec then contextualized the paper within a larger framework. He spoke about the different ethnic and political groups that exist in Bosnia and Herzegovina, and about the fluidity of these identities. He discussed the creation of the Dayton Peace Accords, and the Bosnian party system that has emerged since. Finally, he spoke about the larger political climate in Bosnia and Herzegovina today, and the feeling of disillusionment throughout the country when it comes to politics.

Ms. Karppi then presented the results of her paper. First, she gave an overview of the election results for the national parliament, two entity parliaments, and national presidency of Bosnia and Herzegovina. She then focused on the case of Zeljko Komsic, who was recently elected the Croatian representative of the presidency amidst much controversy. She then spoke about abuses of power-sharing structures in the Dayton Peace Accords by local politicians, in particular of the ethnic parity system. Finally, she offered three key recommendations on how to address such abuses without modifying the Accords: fully implementing the 2009 Sejdic-Finci case, leveraging EU conditionality to induce better behavior from local politicians, and support to local civil society organizations.

Finally, there was a question and answer session with the audience, in which the role of the international community, the role of religion, and the potential for direct democracy and a Swiss-style model in Bosnia and Herzegovina, were discussed.

Link:
Program of the Event
Policy Paper No. 18 - Alexandra Karppi: 2018 Bosnian Elections and the Electoral Framework of the Dayton Peace Accords
Category:
News