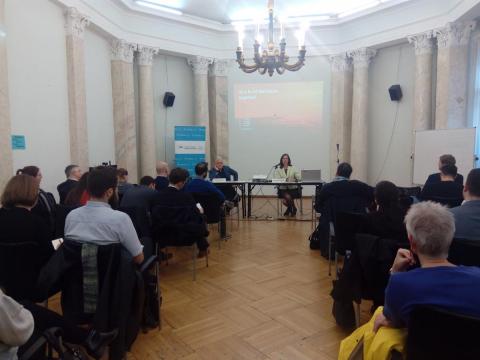 As part of its Ambassadorial Lecture Series, the CEU Center for European Neighborhood Studies (CENS) hosted an event entitled, “E-Estonia: Building Trust in a Highly Digitalized Society” on March 27th. The event featured H.E. Ms. Kristi Karelsohn, Ambassador of the Republic of Estonia to Hungary, who discussed the digitalization and e-governance taking place within Estonia.

Director of CENS Péter Balázs opened the event and explained how Estonia is a model for other countries, not just among EU members, but in the world for modernization.

Ms. Karelsohn started by discussing the process of the development of e-governance and digitalization within Estonia. She began by presenting the most common question Estonia is asked: How did you [Estonia] manage to get the people to trust the digital system?

She first summarized the history and development of digitalization within Estonia and explained that digitalization began in the 1990s when Estonia regained their independence. The new Estonian government wanted to catch up with the western world despite being a small and impoverished state. In response to this situation, Estonia invented a digitalized society. The first step the government took toward digitalization was the development of the Tiger-Leap program, which brought computerization to all schools. According to the timeline she presented, the government took small steps to digitalize such as in 2000 launching E-tax declarations and in 2002 releasing the ID card and digital signature.

Ms. Karelsohn emphasized that in Estonia internet is a social right. Every citizen has an electronic ID for documentation purposes and for using e-services. She stated that today in Estonia, 99% of services are online and there are only three occasions in which one must appear in front of the authorities: to get married, to get divorced, and to buy or sell real estate. She also mentioned that it is required when opening a bank account, though this is not considered a government service. She explained that businesses benefit the most from the digitized process as they can do everything online without physically going to any offices.

She then highlighted Estonia’s E-residency program. The program gives people who are not residents of the country the possibility to still utilize e-services and establish a company within Estonia. To become an e-resident a background check is required and today Estonia has over 52,000 e-residents.

Ms. Karelsohn then said that the area where people are the most concerned for their privacy is in regard to health data. She spoke about how doctors insert health data into the electronic system so that if you go to a new doctor, they will already have all the same information. The country is also now using a digital prescription system as well.

She followed up the concerns by addressing the question: How can I be sure that data is securely stored? She stated there are three main pillars. First, the electronic ID card is a mandatory document and in order to use it one must insert a pin. She emphasized that if someone loses their card, whoever finds it would still need the pin code to be able to use it. Second, she spoke about the concept of X-road, which is a platform where all institutions, both governmental and private, can exchange data. Within X-road, the government cannot by law ask for your data more than once. She explained that the main security feature against misuse of data is the owner’s full control over who is looking at the data and when. Citizens are entitled to inquire about it and receive a report, as all the steps taken in the system have been traced and recorded. Third, she explained that Estonia is strong in cyber security. They suffered their first major cyber-attack in 2007 and the systems held up. Estonia has also set up a data embassy in Luxembourg, where they have stored a backup of all their databases.

Before closing with questions, Ms. Karelsohn remarked about how startups find the environment favorable in Estonia. Skype is the most well-known Estonian startup, and others include Taxify and Starship Robots.

During the question and answer session, Ms. Karelsohn addressed e-voting, as Estonia is the only country in the world that has piloted this. She stated that in March 2019 about 44% of Estonians voted online. She addressed that the main problem with e-voting is that you can never be sure if someone voting online is not alone and being influenced during the process. She said that e-voting takes place for a week the week before the polling opens, which can allow for the opportunity to re-vote in person. She concluded, by stating that entire online system is available in Estonian, English, and Russian.