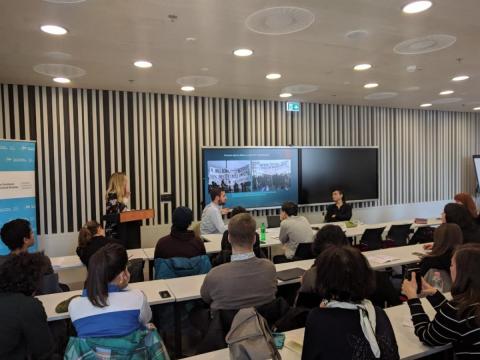 The event opened with a welcome by Hana Semanic, Research Fellow at CENS, on behalf of its director Péter Balázs. She remarked that the prevalence of negative images of the Western Balkans make discussing its contemporary politics difficult, but also makes it especially important to showcase positive stories coming from the region. She mentioned that despite the divisive nature of the dispute, with protests raging across both countries, the resolution was the first time in a long time that solution-oriented politicians took decisive action. While tensions between the two countries still have room for improvement, the resolution will be a good start for improved relations between them, within the region, and with the EU as well.

Ivana Dragsic of Freedom Square, Skopje offered her remarks about the Macedonian perspective of the dispute first. She explained that as a sociologist and civil operator, her perspective on the Macedonian question is not the same as the average Macedonian. Overall, according to Dragsic, the name issue has been used in North Macedonia for political leverage at the local, national, regional, and even international level. Domestically, the issue often re-emerged as a distraction from larger concerns, as is often the case with nationalist rhetoric. While the dispute began as a historical and cultural identification issue, it became a problem of security, territory, and irredentism.

After this introduction, Dragsic gave an overview of the key moments in the history of the dispute from the Macedonian perspective. The dispute, despite its long history, emerged most viciously after North Macedonia’s independence in 1991. At this time the first negative reactions in Greece and among its diaspora emerged. The 1990s were characterized by disputes over what North Macedonia should be called in different international organizations, as more and more countries began to recognize the country’s independence. Even at this time, there were flirtations with different alternative names by the Macedonian government. Most notably, in 1995 the first stability agreement was reached between the two countries, which included some changes to the Macedonian constitution and certain provisions for the treatment of Macedonians abroad. The stability agreement also ended the Greek embargo on North Macedonia that had been in effect since 1994. But by the end of the Yugoslav wars, the so-called “antiquization” and “archeologicalization” of the name dispute began to dominant political discourse in both countries. This culminated in the 10 year rule of Nikola Gruevski and the nationalist party VMRO-DPMNE until this last year.

In the 2000s, the international community’s, in particular the international media’s, gradual acceptance and use of “Macedonia,” instead of the officially agreed upon former Yugoslav Republic of Macedonia (FYROM), as the new country’s name saw continued backlash from Greece. According to Dragsic, it was around this time that the dispute entered the lives of ordinary citizens. Then in 2001, North Macedonia’s armed conflict with its Albanian minority began and drew the country’s attention elsewhere. In 2002, the Greek Ministries of Foreign Affairs presented a document, “FYROM – The Name Issue”, which was the first to clearly articulate the Greek position on the dispute. In the 2006 Macedonian elections, following the territorially reorganization of Macedonia after the conflict, put the nationalist VMRO-DPMNE party in power for the next 12 years. The takeover by this party, as well as the deterioration of public institutions and democratic backsliding that followed, was largely ignored by the international community. During this time, it should also be noted that Greek capital in the country vastly increased, and economic relations between the two countries were quite strong.

The name issue reemerged in the eyes of international observers in 2014-2015 after protests in the region made the dispute a larger security issue. It was the support of the US and the West at large that then allowed the more leftist Social Democrats and Zoran Zaev oust Gruevski and take control of the government. Zaev’s takeover was the major shift, according to Dragsic, that made the circumstances between the two countries more amenable to compromise. Zaev’s party made many radical promises to a country largely in political disarray, many of which have not been fulfilled. Dragsic argues that Zaev’s push to resolve the name dispute was, in part, out of a self-interested need for one political victory. Nevertheless, she agreed that a resolution would not have been possible without pragmatic and compromise-oriented politicians on both sides.

Nikos Bakirtzis of ELIAMEP was then tasked with discussing the Greek perspective. Bakirtzis spent little time on the history of the dispute, agreeing with Dragsic’s timeline and overall assessment of how the situation evolved. He mentioned that in the end, it was nationalists’ ways of thinking by both Greek and Macedonian elites that brought the dispute as far as it went. It could have been very disastrous for the region had yet another stalemate resulted from the negotiations. Bakirtzis also highlighted that Greek backlash since North Macedonia’s independence in 1991 only isolated the country in the international community, and made Greece look unwilling to compromise, which it was for a long period of time. All of this stopped Greece from playing the instrumental role it had envisioned for itself in the Balkans.

Bakirtzis used several different data sources to explain that Greece’s unwillingness to compromise or change course also had to with the fact that Greek public attention had remained, since the 1990s, more or less unchanged on the topic of the name dispute. Overall, the public felt that the name dispute was not ever being properly handled, that North Macedonia was favored by the international community, that North Macedonia was the only one benefitting from Greek-Macedonian bilateral economic relations, and the like. Based on the data, these feelings proved to be continuous not only over time but across different demographics. Bakirtzis highlighted that the data shows that many Greeks know very little about Macedonians, and that this contributes to their staunch opinions about the dispute.

Bakirtzis agreed with Dragsic that what brought the dispute back on the agenda in a new and meaningful way was the entrance of Zaev, though the Greek government took decisive steps in the negotiation process. In many ways it was good timing that both governments were ruled by conciliatory actors, in Greece’s case, Prime Minister Alexis Tsipras and Minister of Foreign Affairs Nikos Kotzias. He said that despite domestic opposition, which was very real at both the elite and public level, international support bolstered the possibility for an agreement as well.

The majority of Bakirtzis’s presentation attempted to contextualize and provide examples of how regular Greek citizens understood the name issue. He highlighted the prevailing view that Western imposition was at the heart of North Macedonia’s case, something that has always been highly sensitive in Greece. He also noted the historical attachment to the region surrounding Thessaloniki as very potent as well. Other than the survey data he provided, he also explored how social media was used to mobilize students and young people into perpetuating nationalist rhetoric, some of which was overtly anti-democratic as well. This rhetoric, he argued, has created polarization among the Greek population in nearly every way, and has allowed for a culture of constant criticism of elites everywhere on the political spectrum.

Bakirtzis ended optimistically, saying that the commitment to long term resolution, mutual respect, and neighborly feelings seems very real in both countries. He noted the progress made by Greece towards including North Macedonia in NATO as a very reassuring sign. He said that Greece needs to continue to prove its commitment to the agreement, while also encouraging the Greek public to see that the deal was in the country’s best interest. Overall, both societies will benefit from the deal. Unity between the two will be essential in addressing the democratic backsliding, the rise of the far right, and the rise of populism that worries many in Eastern Europe today. North Macedonia and Greece, he said, should be models for solving disputes in the rest of the region.

Following the thorough remarks by both Dragsic and Bakirtzis, a question and answer session was held with the audience. The first question asked whether there was a possibility of Greece stepping back from the agreement after its upcoming general elections, as current leaders in the polls are not supportive of the resolution. Bakirtzis responded that although it is true that opposition to the deal is strong in many Greek parties, there is consensus that because parliament ratified the agreement, it will be respected. Dragsic, however, affirmed that unreliable politicians in both countries are a very real concern, and a place where experts and academics need to be engaged. She hoped that setting clear benchmarks for North Macedonia and sticking to them may be enough to keep progress moving forward. Somehow the resolution will have to be imbedded in future political development, which will hopefully be easier now that North Macedonia is a new state with new opportunities and a new energy.

Another question asked about how the two societies can salvage a relationship, and how the government’s resolution will trickle down to the everyday. Bakirtzis emphasized that Greek public perception will still be a major challenge to normalizing relations. He reiterated that Greeks know very little about Macedonians, and only hear radical elite voices. What will be important, then, is bringing people together in low-level, organic ways, such as in academic exchanges. Dragsic affirmed that the transition among local communities is happening. She cited travel between the two countries as an avenue of exchange that has always been strong, but now can be a way to ease tensions and increase healthy contact between the two societies. She did mention, however, that more Greeks need to come to Northern Macedonia, as the relationship has primarily been formed by Macedonians visiting Greece.

Regarding the EU, it was asked whether Macedonians are ready to be a part of the EU, and whether the people still want accession. Discussing the controversy surrounding the referendum in North Macedonia, in which only 37% of voters turned out, Dragsic says that many felt the question was not fairly posed to Macedonians. She said that there was a clear disconnect both in the question itself and in larger discourse about the referendum between how a change in name would be related to joining EU or NATO. This means that taking the low referendum turnout as a sign that people do not want to be in these organizations may not be fair.

Overall, when asked quite simply whether the future would be “bumpy” or “smooth” for the two countries, both Dragsic and Bakirtzis agreed that the long term was optimistic, but that there were some possible bumps in the short term. While Bakirtzis said that the upcoming Greek elections may offer some obstacles, generally the real test for Greece will be how it addresses the Greek public’s concern over the resolution. In North Macedonia, Dragsic noted that there was much less backlash after the agreement then most people expected. Opposition has been relatively peaceful, which is a major step in the right direction for both countries, but also the Balkans at large.

English-language articles about the name deal: