Ukraine at Crossroads. Prospects of Ukraine's Relations with the European Union and Hungary 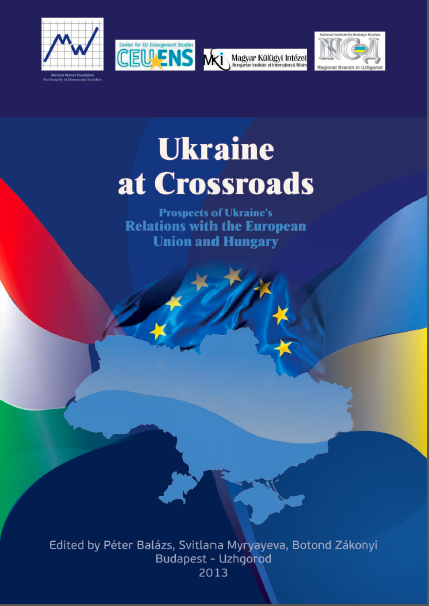 The publication presents the collection of speeches and materials of the participants of the International Conference “Where Is Ukraine Headed in the Wake of the 2012 Parliamentary Elections?” which took place on November 14, 2012 in Budapest. The conference was organized by the Hungarian Institute of International Affairs, the Regional Brach of the National Institute for Strategic Studies in Uzhgorod, the CEU Center for EU Enlargement Studies and was supported by the Manfred Wörner Foundation.
The following questions were up for discussion: the position of Ukraine between East and West and the prospects of Hungarian-Ukrainian bilateral relations after the elections. Highly qualified experts from Hungary, Ukraine, Slovakia, Poland and Austria, representatives of state bodies, European Union institutions, diplomatic missions, and mass media took part in the discussion of the above mentioned issues.
The publication is intended for experts of international affairs, representatives of diplomatic missions of EU member countries, representatives of state bodies and local administration institutions, students of international relations faculties, and anyone who is interested in the issues of Ukraine’s relations with the EU and with Hungary in particular.

Ukraine at Crossroads. Prospects of Ukraine's Relations with the European Union and Hungary