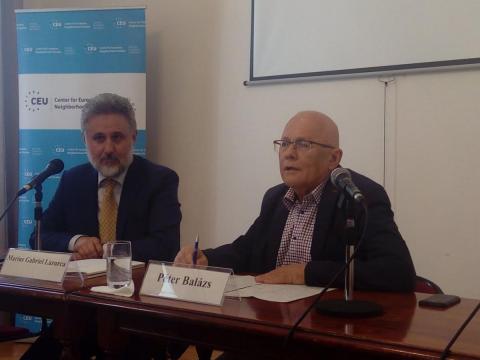 As part of its Ambassadorial Lecture Series, the CEU Center for European Neighborhood Studies (CENS) hosted an event entitled “Preserving EU’s regional relevance. Reflections of the Romanian Presidency of the Council” on June 13th. The event featured H.E. Mr. Marius Gabriel Lazurca, Ambassador of Romania to Hungary, who discussed EU’s neighbourhood and priorities of the Romanian Presidency of the EU Council.

Ambassador Lazurca started his presentation with several reflections, on behalf of the Romanian Presidency, on the Western Balkans and Eastern Neighbourhood, uderlining the importance of enlargment and neighbourhood policy in order for the EU to be a significant foreign policy actor regionally and globally. The EU has to be able to demostrate its ability to influence political processes, to stimulate reforms, to incentivate good practices, to encourage democratic governance, and to stregthen the rule of law.

When it comes to the Romanian Presidency objectives for the Western Balkans and Eastern Partnership in the first five months of the presidency, furthering the enlargement policy and fostering the relationship with the Eastern Partneship countries are the two main objectives under the third pillar of the Romanian Presidency called “Europe, a stronger global actor”. Concerning the Western Balkans, Romania believes there is a link between the enlargment process and the EU’s internal and external security and the Romanian Presidency is determined to implement the principles, criteria and instruments of the enlargement policy, of the provisions included in the Stabilisation and Association Agreements and of the relevant decisions of the Council of the EU.

Ambassador Lazurca empasised that several very important events took place during the first five months of the presidency, all of which tried to keep dynamics of the enlagrement process in the Western Balkan region:

1. Romania invited the candidate states to several high level meetings, one of the most important ones being a high-level quadrilateral format among Romania, Bulgaria, Greece, Serbia, which adopted the Bucharest Declaration, reconfirming the support for Serbia’s European integration effort

2. Meeting between the EU – South East European Cooperation Process in Sarajevo, which attempted to consolidate the regional cooperation as both a prerequisite and a means of advancing the European integration process of the Western Balkans region

3. Romanian Presidency focused on the youth and organized a conference named “How to better respond to European aspirations of the young generation in the Western Balkans?” in Bucharest, whose aim was to empower youth in the Western Balkans to develop their professional perspectives in their own countries.

1. To raise the visibility of the process, by focusing EU’s communication on Eastern Partnership’s achivements and benefits, both for Romania and the partner countries

2. To push for the implementation of the EaP 2020 Agenda with an emphasis on connectivity

3. To contribute to a joint reflection on the future of the Eastern Partnership beyond 2020

In the current challenging context at European level, Ambassador Lazurca reminded the audience that we need to preserve a delicate balance between a realistic approach concerning the enlargement and an optimistic outlook. In other words, we have to remain aware of the existing enlargement fatigue among some EU member states and of unresolved bilateral issues in the Western Balkans.

As Presidency, Romania believes that six partner countries involved in the Eastern Partneship framework have benefited from their association with the EU, in terms of reforms, modernization and resilience. Similar to the Western Balkans, aswering the European aspirations of countries such as the Republic of Moldova, Ukraine and Georgia is a way to promote the EU’s strategic and long-term interests.

Ambassador concluded by saying that it is our interest to have stable, prosperous, and well governed neighbours, both in the Western Balkans and in the Eastern Neighbourhood. Countries that the EU can do trade with, can invest in and make business with, and which eventually will be part of the EU family.