Conference Report: The rise and role of regional cooperation in Central and South Eastern Europe

On April 13 2018, the CEU Center for European Neighborhood Studies (CENS) and the Friedrich Ebert Stiftung (FES) Budapest office hosted a conference titled “From ‘Visegrad Four’ to ‘Varna Four’: The rise and role of regional cooperation in Central and South Eastern Europe”. 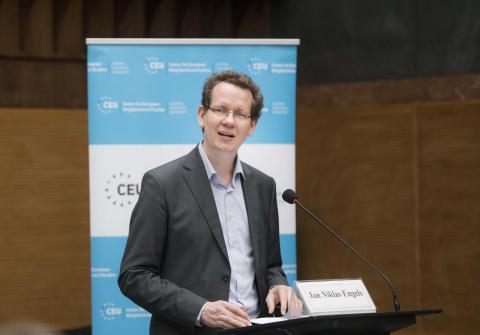 Jan Niklas Engels, Director of the Friedrich-Ebert-Stiftung Budapest Office, opened the event and welcomed the audience and the speakers.  He noted that the V4 are of special interest since they will play a key role in the future of the European Union. He highlighted that after their successful Euro-Atlantic integration, the group sought for a new role, for example, to coordinate their positions before EU council meetings. He concluded that the most important question of will be whether the nature of the Visegrad cooperation will be characterized by competition or complementarity. 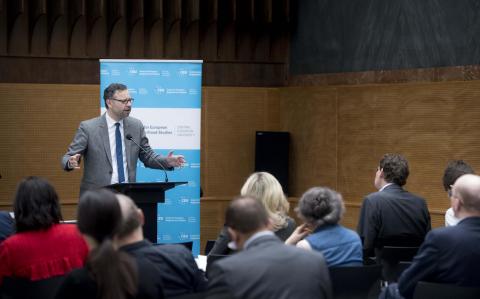 Subsequently, Kai-Olaf Lang, Senior Fellow at the Stiftung Wissenschaft und Politik in Berlin, delivered the keynote address. He highlighted the long-standing history of some formats, like the Benelux, while some are more recent, like the V4. Outlining the current state of the European Union, he argued that crises and clashes, fears of a crumbling community and the growing importance of national interest characterize the current mood. However, he sees an increasing realization of these problems, which is a good sign. According to Lang, there are three approaches to solve the current issues: 1. Re-launching European integration around core-values based on the ideas of Emmanuel Macron. 2. Go back to basics by focusing on the common market and refusing a political union instead remaining intergovernmental. 3. Consolidation of the EU 27 by acknowledging that reforms are needed, however, an inclusive integration model needs to follow. Germany is a proponent of this position and by supporting change it also refuses the idea of a multi-speed Europe put forward by France as well as the revisionist, neo-sovereigntist desires of Central European states. Lang continued, arguing that regional cooperation formats gained increasing relevance. He stated that regional groupings should have common values or otherwise an agreed purpose, and regional closeness or a joint mission. He pointed out that regional organizations have become more important because the European Union has grown, and this is a way to reduce complexity. Furthermore, re-nationalization also makes regional groupings and the need to constantly form majorities or blocking minorities results in more attention for such platforms.

Lang continued by discussing the various roles of regional groups. These can act as clearinghouses by preparing a common position before official EU decision-making. They also function as power amplifiers for smaller states by joining together. Furthermore, regional groups produce more legitimacy for the decision making of the European Union by creating more engagement. Nonetheless, such groups can also contribute to more tensions and divisions if they act as closed clubs or try to sideline common European institutions. In sum, such “minilateralism” is an ambivalent phenomenon. It also shows cleavages inside the European Union. The big member states have to accept that regional groups are on the rise and their importance. On the other hand, regional groups should also involve EU institutions in their work and should reflect on the future reform of the EU. Despite the associated risks, they are a big opportunity for the European Union.

Łukasz Janulewicz, Research Fellow at CENS, moderated the first panel and introduced the rationale for the conference and the broader geographic scope beyond the V4 due to the growth of many different new formats across the Eastern half of the EU. The overarching question of this panel was in how far such formats are complementary to each other and the EU or in how far they might be a competition. 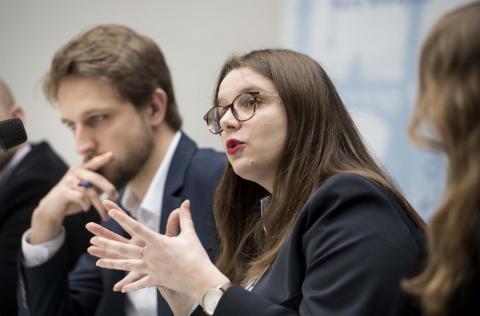 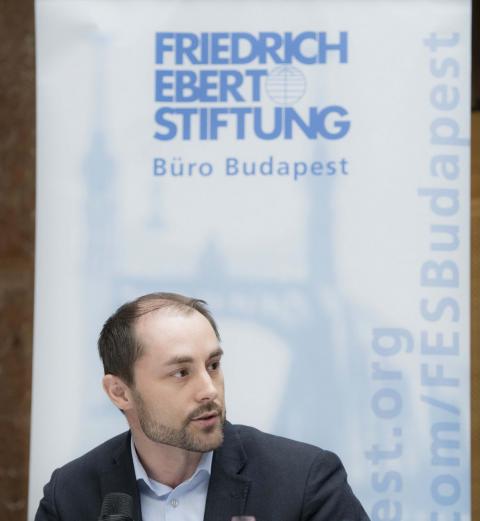 Vasile Rotaru, Senior Researcher at the National University of Political Studies and Public Administration in Bucharest, argued that regional cooperation formats are complementary to Euro Atlantic integration and therefore they important for Romania. The country has been participating in several groupings, like the Black Sea Initiative, the Bucharest 9, or the 3 Seas Initiative. This process is viewed positively in Romanian society. Romania’s main priority is to consolidate itself within EU and NATO and to develop good relations with the Western Balkans. Rotaru argued that Romania’s participation in the B9 and 3SI does not conflict with EU membership because these regional formats contribute to different very specific thematic policy areas. The B9 concerns security and 3SI mainly economic cooperation. Polish attempts to politicize the latter format have raised concerns in the region and beyond. On the other hand, the energy dimension on 3SI could potentially turn Poland into a regional energy hub, which would challenge German interests. Thus, Rotaru concluded that cooperation is complementary in general, but some elements of competition do arise. 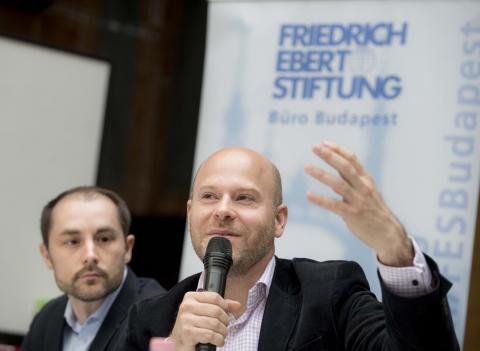 Paul Schmidt, Secretary General of the Austrian Society for European Politics, explained that ‘deeds do not always follow the words’ in the case of Austrian rhetoric about engaging in regional cooperation formats in Central Europe. He believes due to economic development Austria is closer to the Nordic protestant countries. Schmidt continued that Austria is and has been a neutral country. Even on the issue of immigration, there are differences to the V4 and there are further divisive issues like nuclear energy. He argued that competition is good, while complementary is even better and Austria presents itself as a bridge, a meeting place connecting different regions. In this context, regional alliances remain important formats as communication tools. Inclusiveness is and will be an important feature of regional cooperation formats and accordingly, they should not be closed clubs. The concluded that Austria should look for more strategic alliances and the Western Balkans are a key location in this regard. 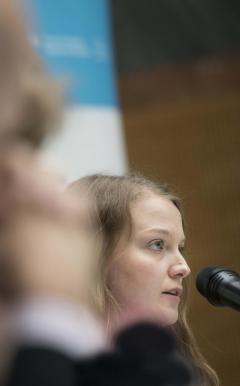 Zsuzsanna Végh, Research Fellow at the European University Viadrina, pointed to overlapping formats existing simultaneously in Central Europe. Participating in them is viewed as an opportunity for smaller states and has strong support according to public opinion surveys. Compared to Baltic cooperation, regional groupings in Central Europe like CEFTA or the V4 were internally driven. Although these formats transformed over time, they are still present and mostly served as bargaining tools to reach specific policy goals in the EU. Végh highlighted 2015 as a watershed of re-nationalization. The V4 is a tool of emancipation for countries of Central Europe, however, the idea of emancipation has changed considerably according, from unification with to division from Western Europe.  She argued that the V4 means both complementarity with and competition for the European Union. The new neo-sovereigntist narrative of the V4 is becoming increasingly problematic, as it seems incompatible to outsiders and pushes the V4 away from the core of the EU.

The second panel focused its attention on the Visegrad group and discussed this particular regional format’s potential role as a conservative coalition within the European Union. The panel was chaired by András Szalai, Research Fellow at CENS. 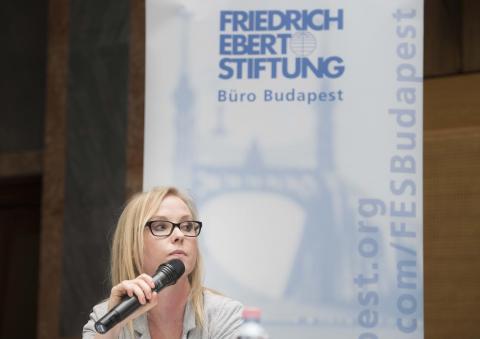 Edit Zgut, Analyst at Political Capital, reflected on the recent Hungarian Parliamentary Elections and outlined her assessment on what to expect after Victor Orbán’s landslide victory. She highlighted the Hungarian government will be able to draw on a strong domestic legitimacy. Orbán is not out to destroy the EU but rather to change the very nature of the EU to pursue an ideological agenda of religious and cultural traditionalism. However, this results in an approach that seeks more and less Europe at the same time as the government is sending out mixed messages and accepts more EU integration in some policy fields. The main potential challenge that the Hungarian government could put up to the rest of the EU using its supermajority to introduce a constitutional amendment to override EU decisions, even though that might remain rhetorical and ineffective. She pointed out that there might be more repressive measures domestically and further abandonment of EU values and concluded that Hungary and Poland pose an unprecedented test for the EU. 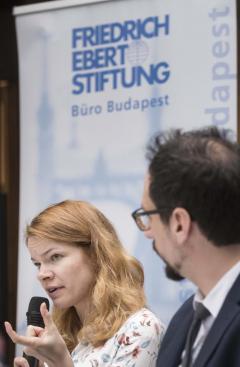 Zuzana Stuchlíková, Head of Brussels Office at EUROPEUM, explained that regional cooperation is only one instrument of Czech foreign policy, as bilateral relations with Germany and the United States stand alongside relations with the V4. She argued that the Czech approach towards the V4 was transformed under the previous Sobotka government under the influence of Foreign Minister Zaorálek, as relations with Germany took center-stage and the Slavkov format gained more prominence. The current situation is characterized by a fractured parliament and a problematic process of government formation. Nevertheless, she expects continuity with regard to Central European cooperation and the Visegrad Group. 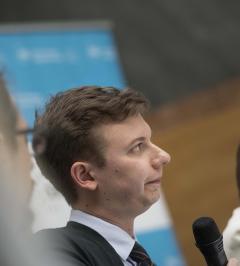 Igor Merheim-Eyre, Analyst at the International Republican Institute, argued that it is problematic to perceive the Visegrad Four as conservative but they can be better described as part-time reactionary. To begin with, the Czech and Slovak governments are not even nominally conservative. He also outlined three principles of conservatism. First, traditionalism as a notion not opposed to progress but appreciative of the worth some things to be preserved. Second, an emphasis on public duty and the preservation of social order and institutions with an emphasis on the ‘good life’ over narrow material self-interest. And third, a suspicion towards top-down interference and a belief in civic initiatives from below, which contrasts with centralism and skepticism towards civil-society in parts of Central Europe. The V4 have also not developed a concrete vision for Europe and are thus limited to occasional reactionary opposition to proposals coming from other parts of the EU. Additionally, one can have a general concern about the state of the political systems in Central Europe and the public concerns about corruption, both of which should worry conservatives. He concluded by pointing out that political conservatism rests on Anglo-Saxon notions and is thus not necessarily applicable to the political scene in Central Europe, where we can find traditional Christian democracy instead. 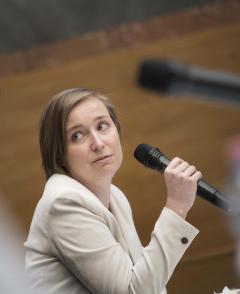 Veronika Jóźwiak, Analyst at the Polish Institute for International Affairs, highlighted that the conservatism in the conservative coalition is not an ideological label but mainly serves Hungarian foreign policy in the Central European region. In Western Europe, on the other hand, the label refers to perceived authoritarianism and an association more with Eastern than with Central Europe. She pointed out that it will be interesting to see if the Hungarian government might try to form a new political faction of sceptics of further European integration in the European Parliament. She concluded that Western European perception of the conservative label makes EU level cooperation more complicated for Central European countries and their legitimate concerns voiced on the European level are marginalized. 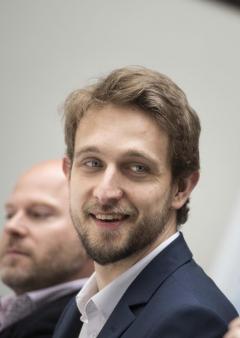 Łukasz Janulewicz concluded the conference, highlighting that a common thread throughout all remarks was that regional cooperation is an added value, but there are diverging views in the public and political debate what to do with regional cooperation and thus what exactly the added value could be or should be. He also pointed out that national interests featured prominently in the discussions. This makes these formats so useful but can also lead to caution and suspicion towards particular formats. Thus, we can summarise that regional cooperation is what states make of it and such debates among experts as this here can contribute to the development of a constructive and mutually beneficial approach to cooperation across the region.