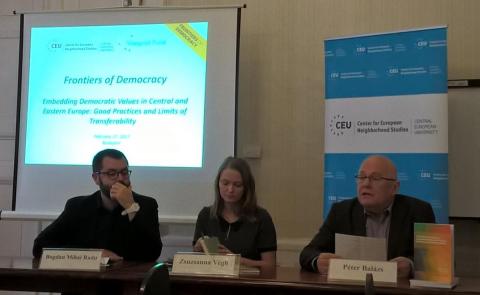 The CEU Center for European Neighborhood Studies introduced its new book "Frontiers of Democracy: Embedding Democratic Values in Central and Eastern Europe. Good practices and limits of transferability" on February 27, 2017, in Budapest at the Central European University.

The book launch, chaired by CENS Director, Péter Balázs, presented the main findings of the project titled Frontiers of Democracy: Embedding Democratic Values in Moldova and Ukraine, conducted by the CEU Center for European Neighborhood Studies in cooperation with the EUROPEUM Institute for European Policy from the Czech Republic, the Foreign Policy Association of Moldova, the Institute of Euro-Atlantic Cooperation from Ukraine, the Research Center of the Slovak Foreign Policy Association, and the Kosciuszko Institute from Poland, and financed by the International Visegrad Fund.

In his intervention, Bogdan Radu, one of the co-editors of the publication, explained how the idea of the project came about and what makes it unique. The approach employed in this project was rooted in two distinct, yet related perspectives. First, the project aimed to assess and discuss various indicators of democratic political culture in the Visegrad countries and in Moldova and Ukraine. While a significant amount of the literature on transition to democracy focuses on institutional choices and performance, this project investigated the different ways in which political values can be embedded in the societal ethos, a difficult and, at times, cumbersome process.  Second, the project brought together scholars and civil society practitioners, and re-considered the very concept of democratization knowledge expertise as a two-way process in which countries at different stages of democratic development can benefit from gaining insight into each other’s experiences. Bogdan Radu concluded that democratization is a complex process, one that needs permanent reflection and public scrutiny, if democratic political culture is to become a part of the society’s broader social and political values.
Zsuzsanna Végh, co-editor of the book, noted that when discussing the potential transfer of democratization experiences from the Visegrad countries to Moldova and Ukraine, the project took a critical stance toward the transition experience narrative and sought to examine whether and to what extent the Visegrad experience (where exists) is applicable to the current reform processes of Moldova and Ukraine. She highlighted that the Visegrad experience shows that democratization is indeed not a 1-way street for which reason close and critical reflection about the democratization processes of the four countries is of upmost importance. Furthermore, she mentioned several circumstances which make the case of Moldova and Ukraine different: the role of the EU in their reform process, the ongoing nation-building in these states, their geopolitical environment and the role of Russia. Citing the conclusions of the case studies presented in the edited volume, Végh finally highlighted the important role of domestice initiative and solutions (let them be governmental or non-governmental) in addressing local challenges often showing unique characteristics. In this vein, she echoed the authors' arguement for adaptation of external practices as opposed to their adoptation.
The book launch was concluded with a Q&A session.