Visegrad Group and the Trump Administration 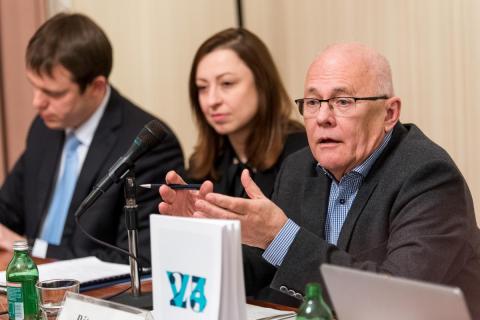 On February 9, 2017, the Central European University (CEU) in Budapest hosted a discussion entitled “The Visegrad Group and the Trump Administration” organised by Res Publica, the publisher of Visegrad Insight, and the CEU Centre for European Neighbourhood Studies (CENS). Four panellists from Poland, Hungary, the Czech Republic and Slovakia discussed the possible turn in the intraregional relations between the V4 countries as well as the Visegrad Group as a whole and the new American administration.

The debate was opened by Wojciech Przybylski, editor-in-chief of Visegrad Insight and the head of the Warsaw based Res Publica Foundation.

The first concern that was raised regarded the current identity of the Visegrad Group. More than 25 years after the establishment of the V4 and nearly 13 years after the accession to the EU, the question reassessing the future goals and ways of cooperation remains valid. Professor Péter Balázs (Hungary) stressed that the V4 is already a part of the transatlantic family (lead by NATO and the EU) and this needs to be taken into consideration when discussing any change in the relations with the new American administration. Professor Balázs reminded the group that there are two poles in the V4 that is pulling the organization in different directions: Poland which perceives Russia’s policies as a threat to the region, and Hungary which denies the real effects of Russian expansion. When asked about the American-Hungarian relations, Prof. Balázs said that after the first wave of comes reality, and even if Trump may like Hungary, he will soon find out that Orban’s country is not as strategically beneficial for America as is, for example, Poland.

Vit Dostal (Czechia) remarked that, in the past, the V4 countries had adopted a joint policy regarding the Balkans, the Eastern Partnership and even Brussels, but they have never done so when it comes to the transatlantic relationship. This is mainly down to the difference in in the Czech Republic, Hungary, Slovakia and Poland. Dostal mentioned that President Zeman and Andrej Babis enthusiastically welcomed Trump’s election and are very interested in how the new American administration will deal with China.

Michał Baranowski (Poland) underlined that we are witnessing the very moment of discontinuity where things may shift or are shifting behind ours eyes. The impulsiveness of President Trump, his unpredictability and inclinations toward a transactional way of analysing the geopolitical situation – reinforced by his nationalistic rhetoric – open a wide range of possible scenarios. The main concern is if the US will still be a pillar of international liberal order.

Viera Zubrova (Slovakia) pointed to the raise of the far-right across the world, the V4 countries included, and the decay of society as an organism based on solidarity and cooperation. According to Zubrova, the new US administration makes us question the future of liberal democracy in the world.

The discussion moderated by Andrew Byrne from the Financial Times and was attended by an audience of considerable size. The debate in Budapest was the second of a series of debates (the first took place in Warsaw on December 7th, 2016) focusing on the topics connected with the publication “V4 – 25 years. The continuing Story of the Visegrad Group”. The debate was live streamed and the recording is available on Visegrad Insight’s Facebook channel.

The report was written by Gabriela Rogowska and was originally published on Visegrad Insight's website.