Frontiers of Democracy: Democratization in Ukraine 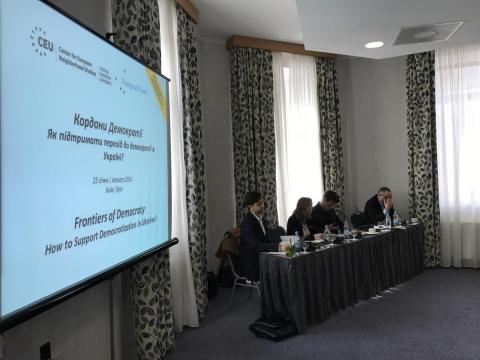 The discussion titled “Frontiers of Democracy: How to support democratic transition in Ukraine?” was organized by the Center for European Neighborhood Studies (CENS) in cooperation with the Institute for Euro-Atlantic Cooperation on January 25, 2017, in Kyiv, Ukraine, to launch CENS’s latest publication, an edited volume titled “Frontiers of Democracy: Embedding Democratic Values in Central and Eastern Europe. Good practices and limits of transferability.”

The discussion was opened by Zsuzsanna Végh, researcher at CENS and one of the editors and authors of the book, who presented the main findings of the project and discussed the goals, objectives and structure of the book. Her introduction served as a starting point for the ensuing roundtable focusing on the difficulties of democratic transition and value change and the challenges faced by Ukraine. The panel featured project partners Václav Křiž (EUROPEUM/PASOS), Tomasz Mazurek (Kosciuszko Institute), Anton Pisarenko (Institute for Euro-Atlantic Cooperation), as well as Leonid Litra (Institute of World Policy) who contributed to the debate with his comments and observations.

One of the key indicators of the health of a democracy is how actively people use their right to participate in democratic decision-making and how interested they are to participate in the first place. Survey results, as presented in the book, show that taking political action beyond voting (e.g. signing a petition) is showing decreasing trends across the four Visegrad states from the 1990s to the 2000s and interest in politics is shrinking in the entire population.

However, do we see similar patterns when observing the young generation that grew up after the regime change? Discussing the key findings of his chapter on youth political participation and socialization, Václav Křiž emphasized that the engagement of the youth in public life in the Visegrad countries shows very different trends which reflect the specificities of the individual countries. Studying such trends and thus reacting to them in the V4 countries is facilitated by the fact that comparative data about the youth’s habits is by now available. Quite to the contrary, in Ukraine and Moldova such surveys are still wanting, and this lack of empirical evidence, based on thorough data collection, hampers the development of comprehensive strategies that could increase the participation of young people in the public life of their democratizing countries. In his contribution Křiž noted that the state can play a very important role in encouraging political participation, and through that increasing democratic engagement.

Yet, in certain cases, society is more likely to be a driver of change and a strong advocate for embedding democratic values. In his contribution, Anton Pisarenko highlighted that civil society initiative did contribute to turning Ukraine in recent years from a change-taker into an initiator of its own reforms, although unlike the V4 earlier, Ukraine needs to undertake these in a challenging geopolitical environment. In this context, he underlined the preeminence of political will without which reforms can run into a halt despite promising new institutional structures and progressive citizens demanding reforms. While Visegrad countries can support Ukraine by sharing their experiences with transition, due to the different context and stages of progression, transferability certainly has its limits.

Transferability of experiences is not an obvious given when it comes to supporting the development of an open and tolerant society that steps up against discrimination and is inclusive in nature. Tomasz Mazurek noted that in the case of the Visegrad countries, a general desire to “return” to the West was present in the 1990s and there was no outright objection to democratic values either. Still, transition was expected to take place so quickly that newly established institutions and instruments in fact run ahead of the desirable mentality change. In terms of fighting discrimination, this often resulted in having legislation in place to step up against exclusion and discrimination, without an automatic change in mentalities that would uphold these principles. In such situations, Mazurek argued, tolerance can be the first victim of domestic and international conflict, and highlighted the role of civil society organizations that can work on preventing such fallbacks.

Leonid Litra joined the discussion by enlisting some attitudes that indeed impede democratic change in Ukraine (and other post-Soviet countries) and which are hard to overcome during a process of democratization. Among such social attitudes he mentioned paternalism, conformism, intolerance, the fear of reforms or devaluation of knowledge. The latter leads to non-professionalism, which can be as dangerous in undermining reforms as corruption, according to Litra. He argued that such attributes can challenge and damage the transition process, although when talking about Ukraine, he mentioned that this time around, after the Euromaidan revolution, society seems to be more consistent in its demand for reform. He compared this process of transition to a marathon as opposed to a sprint, where long-term determination is a key factor.

The discussion was concluded by a Q&A with the audience offering their comments and posing questions to the panelists.

The event was organized as the concluding event of the project titled “Frontiers of Democracy: Embedding Democratic Values in Moldova and Ukraine”, which was supported by the International Visegrad Fund and formed part of the Frontiers of Democracy initiative of the Central European University.