Frontiers of Democracy: Democratization in Moldova 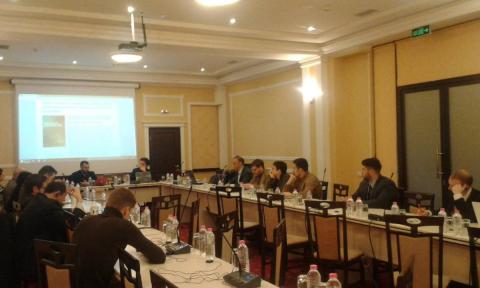 The discussion titled “Frontiers of Democracy: How to support democratic transition in Moldova?” was organized by the Center for European Neighborhood Studies (CENS) of the Central European University in cooperation with the Foreign Policy Association of Moldova on January 27, 2017, in Chisinau, to launch CENS’s latest publication, an edited volume titled “Frontiers of Democracy: Embedding Democratic Values in Central and Eastern Europe. Good practices and limits of transferability.”

The discussion was opened by Bogdan Mihai Radu, visiting researcher at CENS and one of the editors and authors of the book, who presented the main findings of the project and discussed the goals, objectives and structure of the book. His introduction served as a starting point for the ensuing roundtable focusing on Moldova’s transition to democracy with the participation of project partners Victoria Bucataru (Foreign Policy Association of Moldova) and Samuel Goda (Research Center of the Slovak Foreign Policy Association), as well as with Valentina Teosa (Moldovan State University) and Oazu Nantoi (Institute of Public Policy) who contributed to the debate with their comments and observations.

Speakers and commentators from the audience touched upon several important points. They highlighted that democratic transition in Moldova is intimately tied with its state- and nation-building processes. Since the Republic of Moldova became an independent country after the dissolution of the Soviet Union, public opinion has been divided between proponents of two different views of the country’s future: those who believe that Moldova should follow the example of its Western neighbors being committed to democratic consolidation and European integration; and those who support closer ties with Russia and the former Soviet republics. Participants on the panel and in the audience agreed that democratic transition in Moldovan case is rendered more difficult by this lack of national consensus concerning the country’s future path, and, indeed, its national identity. Moreover, the country’s political transformation is complicated further by geopolitics, especially by the situation of Transnistria. In this context, the transferability of best practices of democratic change from the V4 countries toward Moldova is, at best, limited. The Visegrad countries did not face similar challenges during the early 1990s, when they held a strong, quasi unanimous, support for democratization and approximation to the European Union.

Another key difference, pointed out during the roundtable, was the beneficial effect of the EU’s own conditionality strategy, which was successfully employed in the case of the V4 countries, and which does not function effectively in the case of Moldova due to the uncertain integration prospects. The assumed preeminence of the rule of law in the Visegrad countries was critical in helping to construct democratic values either through civic education, civil society mobilization, or through political participation. Relying on the rule of law in Moldova, however, is a questionable presupposition, which renders efforts to embed democratic values to have limited effects. Furthermore, as speakers noted, rooting such values within the ethos of the Moldovan society is made difficult by an increasingly politicized mass media, which is increasingly falling victim to oligarchs. The absence of true role models of high democratic standing amidst the political elite and the devastating effects of corruption on institutional and interpersonal trust hampers the process of value change.

The event was reported by Radio Europa Liberă and Report.md (articles in Romanian).

The discussion was organized as the concluding event of the project titled “Frontiers of Democracy: Embedding Democratic Values in Moldova and Ukraine”, which was supported by the International Visegrad Fund and formed part of the Frontiers of Democracy initiative of the Central European University.