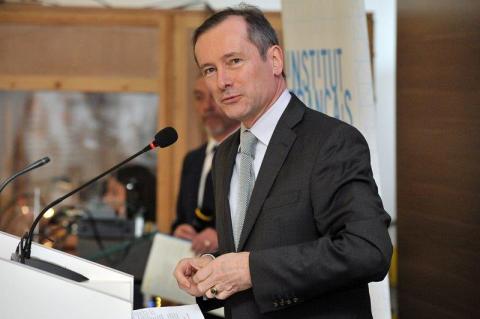 The CEU Center for European Neighbourhood Studies, in the framework of its Ambassadorial Lecture Series, hosted a public lecture on 29 November 2016 entitled “The Political Landscape in France on the Eve of the 2017 Presidential Election” delivered by H.E. Mr. Eric Fournier, French Ambassador to Hungary. The lecture was attended by a distinguished group of students, diplomats and academics.

In his opening remarks, Ambassador Fournier said that France is currently facing a political crisis, which stems not only from the aftermath of economic crises, but from the global phenomenon of skepticism towards political elites, resulting in the emergence of anti-establishment parties in France.

He further depicted the French political landscape, from the far-right to the radical left parties, with particular emphasis on their relations with Russia. Marine Le Pen’s far-right Front National party (FN), besides being secularist, anti-immigration and euro-sceptic and with harsh criticism towards Islam, is the only party vocally supporting Russia in the Ukrainian crisis and accepting financial assistance from Moscow for their campaign. Nevertheless, the FN – due to Le Pen’s modernizing turn – broadened its appeal among voters and has a real chance of getting through to the second election round. On the other side of the political palette, Jean-Luc Mélenchon’s Front de Gauche shares many controversial ideas with Le Pen on economic issues and their attitude towards Moscow.

The Ambassador continued by talking about official positions of the two main parties. For Les Républicains it is more difficult as the party is divided within on the role of Russia. If François Fillon, the official candidate after winning the primary round beating the favorite Juppé, is to be the next president, he will try to lift sanctions on Russia. In the meantime, Parti socialiste (PS) is preoccupied with choosing their candidate. According to Mr. Fournier, the most exceptional case would occur if the current President François Hollande and Prime Minister Manuel Valls run against each other for presidency. The most popular aspirant for the post is an independent one, Emanuel Macron, who is not backed by any political party. However, his movement En Marche has the potential to address the youth and economic sector. The Ambassador reminded, however, that governance without a party raises crucial technical and institutional questions.

In addition to political parties, political elites also consider Russia to be an important factor in the French foreign policy. Major companies, particularly in the agricultural sector, hope that the sanctions will be lifted soon, and so does Dominique de Villepin who promotes Russia’s point without openly backing Vladimir Putin’s system. This is a commonly supported idea in France, corresponding to the legacy of Gaullisme, not aligning with big powers and guarding their national identity.

Ambassador Fournier finished his presentation by taking into account factors which are defining public opinion on the election night. He reminded about the dreadful events of 2016, stating that many voters will choose according to candidates’ policy on immigration. He emphasized that the North-Atlantic Alliance does not necessarily mean equal security. “Our American counterparts mainly think in terms of nuclear defense, but a nuclear bomb cannot protect us from terrorist threats emerging from the suburbs of European cities”, said Mr Fournier. The public debate about primary education, in addition to difficult questions about immigration and integration, could also be a topic that defines this campaign.

The lecture was chaired by Péter Balázs, Director of CENS and former Hungarian Minister of Foreign Affairs.