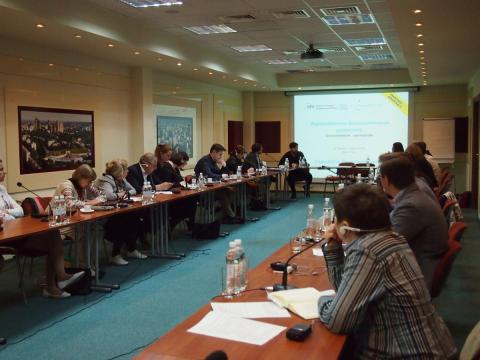 The Center for European Neighborhood Studies (CENS) held its workshop entitled “Embedding Democratic Values: Tolerance and Transparency” on May 16, 2016, in Kyiv, Ukraine. The third workshop of CENS’s “Frontiers of Democracy: Embedding Democratic Values in Moldova and Ukraine” project was opened by CENS visiting researcher Bogdan Radu, who introduced the idea of the project, which is to study the phenomenon of social transition and how democratic values become embedded in societies in transition. In two panels, the workshop focused on the values of transparency, accountability and tolerance, non-discrimination in transitioning societies.

The first panel of the workshop, “Tolerance, cultural diversity and (anti-)discrimination in democratic transition and consolidation”, chaired by Agnieszka Słomian, research fellow of the Kosciuszko Institute, dealt with the status of various groups of minorities in new democracies and focused on the task of embedding tolerance in the societal ethos in recent and transition democracies of the region.

The National Council on Preventing and Fighting Against Discrimination and Ensuring Equality in Moldova (in short, Equality Council) was founded in 2013, following the adoption of Law 121 on Ensuring Equality, which was a basic requirement of the EU in order for Moldova to be able to sign the Association Agreement. The Council’s president, Yan Feldman, introduced the equality law which implements the two relevant EU directives and defines 12 protected grounds with an open-ended list, giving also the opportunity to use the precedents of the European Court of Human Rights as well. The Council has 5 independent members named by the parliament for 5 years, partly lawyers, partly representatives of civil society. Its goal is to “prevent, promote and protect”, but it has no right for legal initiative. It is a part-judicial body that gives legal opinion on concrete cases. De jure its decisions are obligatory, but it has no de facto means to enforce the legislation. Feldman also spoke about the public perception of Moldova’s new Equality Law, saying that it has been seen exclusively as an “LGBT law” by large parts of the society since its adoption. The opposition and the church has a role in upholding this perception, according to Feldman, as it refers to it as a gay law that promotes pedophilia. A recent survey conducted with the support of the UN showed that social distance is higher than the medium distance toward LGBT, people with HIV, former prisoners, people with mental disabilities, Muslims, people of African origin and Roma. This is also reflected in the rulings of the Equality Council: the most frequent grounds on which discrimination was established by the Council’s decision are disability, sex/gender, language, ethnical origin, age, sexual orientation, religion. The social distance is lowest toward Russians and those who speak Russian as a first language.

In his intervention, Laco Oravec, program director of the Milan Šimečka Foundation (Slovakia), presented a rather somber picture of the Slovak society with regards to its level of tolerance. He observed that while transparency and fighting against corruption had brought societies on the same platform and political parties were willing to stand up for it across the region, tolerance and fighting discrimination had become a divisive issue over the past decades that rather polarized societies. Initially, the Velvet Revolution had produced a level of political correctness both in Slovakia and the Czech Republic that prevented open expressions of intolerance (anti-Semitism, racism, xenophobia) for a while, and it was in this context, but under pressure from the EU, that the Act on Equal Treatment was adopted in Slovakia. Although the document is strong in legal terms, its proper implementation is wanting, and it does not reach a wide social impact. On the level of society, attitudes have not changed toward the Roma population significantly in the past 25 years leaving them the most negatively viewed minority. To make matters worse, their complaints are often not investigated and their social inclusion lags behind. Programs supported by the government from EU structural funds in the 2007-2013 and 2014-2020 financial periods have not brought results so far. Oravec also highlighted that addressing discrimination against the LGBT community has been avoided, and there is no legislation guaranteeing their protection. While the situation of foreigners is already one of the worst in Slovakia according to MIPEX index, the current refugee crisis resulted, in Oravec’s view, in a ten-year backlash and a rise in tension and hatred against foreigners. According to recent Eurobarometer data, Slovakia and the Czech Republic are the most Islamophobic countries in the EU, anti-Semitism still runs high, and while the perception of LGBT people has somewhat improved, the overall level of mindset of the society has not changed over the past 25 years in the country.

Addressing the situation of Roma has also fallen short of needs in the Czech Republic over the years. While social exclusion and segregation had been a problem for long, the first concrete messages about the situation of (mostly Roma) marginalized communities only provoked thinking about solutions to the matter in 1997, said Martin Šimáček, director of the Institute for Social Inclusion in the Czech Republic. Moving beyond an ethnic approach and strategies based on policy expectations, concrete data- and evidence-based solutions started to be developed even later, under the Agency of Social Inclusion in 2006. Šimáček highlighted that the ethnic approach was insufficient to achieve change in the social situation of the Roma. He argued for a civic approach where strategies are based on data from the ground, are holistic and thus address the complexity of the social situation of the marginalized communities, and propose locally specific and evidence-based solutions. Their implementation should then be supported by the appropriate legal framework and financial resources. In the case of the Czech Republic, EU funds were a great resource for this. In the context of Ukraine and Moldova, Šimáček expressed the opinion that the way V4 countries manage(d) social inclusion could provide relevant lessons for the countries of the Eastern Partnership.

The second panel, “Accountability, transparency and (anti-)corruption in transition”, chaired by Anton Pisarenko, project manager of the Institute of Euro-Atlantic Cooperation in Ukraine, the difficulties of breaking the circles of corruption in transitioning societies beyond the introduction of anti-corruption legislation and the establishment of anti-corruption bodies. The discussions explored what factors could contribute to fostering a change in mentality and embedding accountability and transparency as basic social values in a democratizing polity.

In her intervention, Katarzyna Batko-Tołuć, programming director of the Citizens Network Watchdog Poland, presented an approach to fighting corruption which addresses the problem at its roots with the involvement of a wide group of citizens. She emphasized the importance of the presence of a watchdog movement on the local level, which monitors how local authorities work and if it is according to the roles. Nevertheless, at this level there is often not enough knowledge or practical experience, thus it is important to empower people, and give them legal tools to hold the local authorities accountable. If this network building on local knowledge exists, it shall be easier to fight corruption. In Poland, corruption is a silent problem: there is no significant petty corruption and there is no state capture. While there are important tools to fight corruption (e.g. the Central Anti-Corruption Office or a law on lobbying, regulation for party transparency, conflict of interest provisions), shortcomings are also present. There is a lack of strategic thinking about tackling corruption, the efforts seem artificial and consequences are lacking when someone breaks the law. There is no clear understanding about the principle of conflict of interest and the situation is worsening in this regard. Further problem is that investigative journalism has disappeared and local dependencies are prevalent. To improve the situation, legal guarantees are needed and more attention should be paid to whistleblower protection. Political life needs to be made more transparent and media more invested in better journalism. For watchdogs working on anti-corruption, it is also important to reach out to people, build awareness and a need in people to fight corruption. While a mentality change is important, good laws need to be created first as it is not possible to do anything against the phenomenon without it. During the past 16 years, Citizens Network Watchdog Poland implemented a wide range of activities from public campaigning, research, advocacy, to civic education or empowering independent watchdog movements.

The patterns and forms of corruption have changed over time in Hungary, according to Anita Koncsik, researcher of K-Monitor Watchdog for Public Funds in Hungary. While in the communist period, nepotism and petty corruption characterized the situation, after the regime change political finance and public procurement had become its two main channels in a context of fragmented state capture. Following 2010, state capture evolved further and was supported by crony-tailored legislation and even an ideological rationalization, in her view. Party financing remains a problematic area supported by legislative gaps and loopholes and reluctant monitoring authorities, such as the State Audit Office or the Treasury. In this context, civil monitoring activities are especially important as they can uncover potential abuse. Transparency leaves a lot to be desired in multiple fields. In the case of the enrichment of politicians, loopholes exist in the legislation, e.g. only the politician’s assets need to be declared, not those of family members, and monitoring is also loose. Access to information has worsened over the previous years: the scope of the freedom of information act was narrowed, fees are charged to fulfill data requests and exemptions have been introduced. Public procurement remains a source of corruption, Koncsik argued, with calls often tailored for the bidder. To enhance the transparency of public procurements, K-Monitor is active in the project called Red Flags, which builds on an interactive tool to monitor procurements in Hungary at their various stages. The NGO also works on enhancing the transparency of asset declarations: they digitalize their content with the help of volunteer on the so-called “Dawn of the Asset Declarations” and make it available online.

Oleksandr Sushko, research director of the Institute for Euro-Atlantic Cooperation underlined that Ukraine is facing similar challenges currently to what Visegrad countries had faced before. In his view, a main point of consideration when dealing with the problem of corruption is that it is not only a phenomenon present in the elite, but also something that is part of the national culture. For this reason, legislation alone is not enough; the culture has to be changed too. He cautioned that fighting corruption is a complex and long process that requires the engagement of the whole society to achieve progress, especially when even small steps evoke social resistance. In Ukraine, corruption is recognized as the top problem now. There is a basic understanding and a strategy; legislation is advanced and the new institutions are authorized, but success is further. Since the Maidan, fighting corruption is much more present on the public and political agenda. Progress has been made in the register of beneficiaries or the electronic system of declaration, which provide good tools for investigative journalists. Other elements are still missing: the reform of the judiciary and the prosecution is still far. Sushko argued that NGOs are key actors and give ground for hope in the current situation. They will have an important role as the slow changes occurring in the aftermath of Maidan are not yet irreversible, and resistance from within the system is starting to re-occur as the time goes on.

The project “Frontiers of Democracy: Embedding Democratic Values in Moldova and Ukraine” is supported by the International Visegrad Fund and is part of the “Frontiers of Democracy” initiative of the Central European University. It is implemented in cooperation with EUROPEUM in the Czech Republic, the Foreign Policy Association in Moldova, the Institute for Euro-Atlantic Cooperation in Ukraine, the Kosciuszko Institute in Poland and the Research Center of the Slovak Foreign Policy Association.

Yan Feldman - The Work of the Equality Council