Embedding Democratic Values: The Role of Civic Education and Media in Democratization 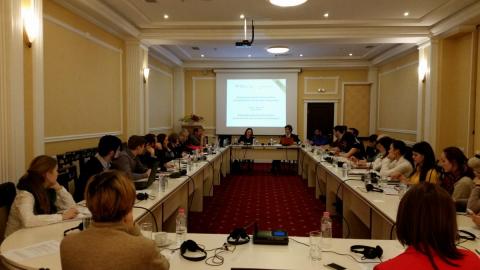 The Center for European Neighborhood Studies (CENS) held its workshop entitled “Embedding Democratic Values: The Role of Civic Education and Media in Democratization” on March 21, 2016, in Chisinau, Moldova. The second workshop of CENS’s “Frontiers of Democracy: Embedding Democratic Values in Moldova and Ukraine” project was opened by CENS visiting researcher Bogdan Radu, who introduced the idea of the project, which is to study the phenomenon of social transition and how democratic values become embedded in societies in transition. In two panels, the workshop focused on the role of civic education and media as channels and tools that can support the development of an enabling environment for the adoption of democratic values and principles by the society as a whole.

Talking about the Hungarian context of public education, Bálint Juhász, head of the education program of Krétakör (a Hungarian NGO), highlighted that the current framework and curriculum is too centralized, focuses too much on lexical knowledge and as such does not encourage students to develop their individual opinions and critical thinking. To address this shortcoming, Krétakör started its civic education program called Free School (Szabadiskola), which seeks to empower youths, as a particular marginalized group, to express themselves and make their voice heard, while experiencing cooperation with people from different backgrounds and directly engaging with a variety of social problems they would otherwise not encounter. One such exercise included students investigating the situation of homeless people in Hungary, which also served to fight prejudices by gaining a better understanding of their situation. As a finish to the program, students conducted a guerilla campaign placing posters of homeless people at busy public places in the capital in order to raise awareness about a prominent social challenge Hungary needs to tackle. Krétakör’s message includes that instead of avoiding talking about politics in school, this should be welcome, so students could be prepared to make conscious choices in their lives. For its Free School program, Krétakör has been awarded the ECF Princess Margriet Award for Culture in 2016.

Civic education means assisting the people to become citizens, according to Tomasz Horbowski, director of the Information Center for Local Authorities in Moldova. The most important element of this process is to engage them by making them care while also making them understand why exactly they should care. Keeping the “why” in sight is preeminent and should drive the whole process, albeit it is often forgotten in the midst of thinking about the “what” and the “how”: what do we want to achieve and how do we want to get there? To illustrate the underlying reasons for citizens’ engagement he reminded of the motivations behind the Maidan, that is the Revolution of Dignity, as well as of the Polish Solidarity movement in which 10 out of 40 million Poles were officially engaged stepping up for their human dignity. Talking about fostering engagement, Horbowski underlined the role of local initiatives (e.g. city movements) which tap into those local issues people directly feel responsible for and can easily take ownership of. In short, these initiatives have the potential to make people care, get involved and make them understand why they should care, and should be taken into consideration by donors even if they are not the classic civic organizations in the Western sense.

Olga Budnyk, the head of the Political Education Program of the Center for Political Studies and Analysis (CPSA, Ukraine), noted that as of now civic education fully remains informal and it is not recognized by the state. This, however, is only one of the challenges: teaching values to people is difficult in itself and practical success can only be achieved in the public sphere, people will only include the taught principles in their work once they have fully embraced them as part of their own mentality. In this sense, the human factor is more decisive in civic education than the institutional, according to Budnyk. While one often thinks of youths as the targets of civic education, Budnyk highlighted that the target groups should be much wider. Programs should target older people, young adults, people already working in administration; civil society and politicians equally. Talking about success, she mentioned that the programs should have a multiplier effect and participants should start to make gradual changes in their own institutions. For example, several alumni of CPSA’s High School of Politics program are now in public positions, and the organizers see that the former participants have started to consciously integrate democratic principles into their work. Furthermore, while public officials in local authorities earlier resisted e.g. the call for transparency and did not understand why they would need to be open about their spending, slow changes start to appear.

The second panel, “Media in the context of democratization”, chaired by Victoria Bucataru, program director of the Foreign Policy Association of Moldova, discussed the role and responsibility of media and journalists as such in the process of democratization through the concrete examples of Moldova, Slovakia and the Czech Republic.

Traditionally, mass media can be a tool of democratization and the mission of the press is to build public opinion and influence the reality of people, started Petru Macovei, executive director of the Association of Independent Press (Moldova). To fulfill these roles, a stimulating and incentivizing legal framework without formal constraints and a critical mass of outlets that understand how to use their rights are essential. Nowadays, however, the press is becoming more eroded; public opinion is not only shaped by traditional media. New media, as a general trend, increasingly shapes the space. In the case of Moldova, due to the concentration of media ownership in the hand of a few who have direct and obvious political links or even affiliation, the legal framework does not ensure the efficient functioning of mass media. The editorial policy of outlets is often political which results in biased and selective coverage, and in the end, prevents media to function as a proper watchdog and provide balanced coverage. In parallel to the domestic political control, external (Russian) influence spreading false messages and propaganda also exercise a negative influence and undermines the democratic mission of mass media. To counter these two trends, Macovei called for the coordination of those efforts and initiatives which seek to provide proper coverage in oder to be effective and ensure that they can contribute to a free and impartial discussion.

Václáv Štětka, senior researcher and head of the Political Communication Research Group at the Charles University, introduced two dominant trends taking shape in Central and Eastern Europe: 1) the transformation of media ownership and 2) the transformation of the digital media space, which together lead to the weakening of journalism and the decline of traditional media. As part of the transformation of media ownership big Western publishers gradually leave the region and local businessmen take their place, and use their ownership as a tool of “deterrence”. Hence, media becomes instrumentalized for political and business purposes. In Štětka’s view, this leads to declining trust in traditional media and a turn toward social media. The social media space, however, is fertile ground for “parajournalism”, the rise of hybrid platforms which pretend to be journalistic outlets but have nothing to do with journalistic ethics. These online fora present a danger for democracy by spreading false information, often generating negative social attitudes and channeling extremist views into the mainstream. In conclusion, there is urgent need to address these threats which put the profession in danger.

The direct link between balanced, quality journalism and democracy was also highlighted by author and journalist Martin M. Šimečka, who writes among others for Respekt and Dziennik N. He argued that the reason we could still talk about democracy in Central and Eastern Europe was in fact the role of the media. While Poland, Slovakia and the Czech Republic all had strong and independent outlets (print or televised), such influential media was lacking in Hungary, in his view, which in turn have some explanatory power for the decline of democratic standards in Hungary. He confirmed that social media platforms indeed take over the influence from traditional media, which is especially risky when there is no good quality mainstream media available at the same time. At the same time, he expressed his trust in people’s desire to ready independent and good journalism, and if they can get such a trustworthy product, they would be willing to pay for it. This, however, might pose the need to gather all the good professional journalists in one place, in order to ensure the survival of the outlet.

The project “Frontiers of Democracy: Embedding Democratic Values in Moldova and Ukraine” is supported by the International Visegrad Fund and is part of the “Frontiers of Democracy” initiative of the Central European University. It is implemented in cooperation with EUROPEUM in the Czech Republic, the Foreign Policy Association in Moldova, the Institute for Euro-Atlantic Cooperation in Ukraine, the Kosciuszko Institute in Poland and the Research Center of the Slovak Foreign Policy Association.

Article about the workshop in Vocea Poporului (in Romanian)
Category:
Events
Research
News