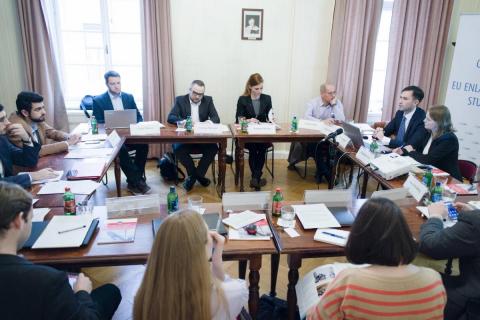 Lively discussions kicked off the new project of the Center for EU Enlargement Studies (CENS) entitled “Frontiers of Democracy: Embedding Democratic Values in Moldova and Ukraine” on December 4, 2015, at the Central European University (CEU). The goal of the project is to study various aspects of the process of embedding democratic values in the societal ethos in Central and Eastern Europe, and thus to contribute to the democratic development of Moldova and Ukraine.

In his introductory remarks to the workshop, Miklós Haraszti, Director for Research on Human Rights at the CEU Center for EU Enlargement Studies, noted that seeing the slide-back as well as the fading of democracy in countries of the third and fourth wave of democratization, observers belonging to the universalist school live nowadays in a constant state of disappointment, while the relativist school, which does not see populism and illiberalism as a problem, is on the rise gaining supporters in Central and Eastern Europe. This is the context where CENS’s research project will need to operate: in the spectrum between the universalist and the relativist school. As Haraszti noted, the subsequent discussions would face a challenge in answering serious questions, such as: “what methods should be proposed, what institutions transported, what local developments assisted? How can a fading and a slide-back of new “designer democracies” be avoided?” And last, but not least, as a main area of inquiry of the Frontier of Democracy project, “where should the weight of outside assistance be concentrated, around the institutions or the mentality of democracy?”

The first panel, chaired by CENS Researcher Zsuzsanna Végh, provided forum for discussion about the shortcomings of the current embeddedness of democratic values in the Visegrad Four countries as well as in Moldova and Ukraine in order to highlight the importance and timeliness of the research in this particular regional context.

As CENS Visiting Researcher Bogdan Radu put it, embedding democratic values in the societal ethos is a critical component of successful consolidation. According to the literature, after institutional choices are made at the beginning of the democratic transition process, political values should follow. However, empirical data shows that a democratic political culture is yet to be established in Central and Eastern Europe. If anything, the percentage of those preferring stronger leadership to the detriment of freedom of expression has grown in the 25 years since the breakdown of communist regimes. Therefore, embedding democratic political values should be considered as a lengthy process in which various arenas of socialization play important roles. “Understanding how some political values, and not others, were easily integrated in the society's set of core beliefs is a research priority in CENS’s Frontiers of Democracy project, which could contribute to the quality of democracy in post-communist EU member states as well as in Moldova and Ukraine – countries still in the midst of broad political transformations,” said Radu.

In her intervention, Olga Gyárfásová, Assistant Professor of the Comenius University in Bratislava, discussed the connection between the effectiveness and legitimacy of democracy, as well as citizens’ satisfaction with the democratic regime. Survey data on Slovakia showed that social rights (such as, health care and a decent standard of living provided to everyone) are prioritized over participatory rights by citizens in the country as a new democracy. Moreover, she found that satisfaction with the functioning of democracy is strongly influenced by the external efficacy of the regime (the quality of the actual output), while internal efficacy has a much lower impact. In short, citizens expect democracy to provide good governance. However, reality fell short of expectations, which is illustrated by citizens becoming disillusioned with the high level of corruption, with the dishonesty of the political elite, while at the same time having lower interest in and less understanding of politics. This rising spiral of disaffection and disinterest results in a vicious circle of institutional and individual alienation.

Editor-in-chief of the New Eastern Europe magazine, Adam Reichardt, compared similarities and differences between the democratic transition processes of Central Europe and of the countries of the Eastern Partnership (EaP). He argued that while the starting point was similar in both cases, the paths and the context certainly differed. While the countries of Central Europe had a geopolitical “breathing space”, the frontrunners of the EaP (Moldova, Ukraine and Georgia) feel Russia’s pressure much stronger currently. The European Union played a fundamentally different role in the case of the first group, being a pole of attraction. Without the EU membership perspective, this role is no longer so clear. The form of regional cooperation among the countries is also different: in the case of the Visegrad Group it developed organically upon the initiative of the participating states, while the EaP is a construct of the European Union. Finally, the public and the civil society have a different role in the two cases. While civil society was just nascent in Central Europe after 1989 and the transition was elite-driven, in Moldova and Ukraine they are active drivers of democratization. In this context, and especially if the EU membership perspective is missing, NGOs should be much more invested into.

Associate Fellow of the Foreign Policy Association of Moldova, Alexandru Baltag, elaborated on the challenges of the transition process of the Republic of Moldova, which he saw as a still on-going process both in political, economic and social terms. The reasons, in his view, are many-fold: political transition started late, parties are centered around strong individual leaders driven by self-interest, consequently, institutions are strongly politicized, while there is no consensus in the society about a common civic identity, which in turn results in conflicts among generations, linguistic groups and groups preferring different geopolitical orientations. Due to these factors, no true and profound social changes can be identified yet in the country, said Baltag. Nevertheless, he was optimistic saying that thanks to historical and geopolitical factors as well as the internal pressure from the pro-European younger generation and from the economic needs of the state, Moldova is on its way to an irreversible processof economic and social integration with the European family.

In the second panel, chaired by Bogdan Radu, participants discussed the trends of democratic participation in their countries with particular attention to the youth and to new channels of participation, such as social media.

To introduce the topic, Jan Husak, Board Member of the Czech Council of Children and Youth, highlighted that the proportion of those who actively and regularly participate in political life is only about 8-9%. Those who do not participate have generally three broad reasons: they do not want to, they cannot (do not have the means) or they do not know how they could. This last group, who could be mobilized if knew more, is about 35%. Yet civic participation is not only involvement in politics. Even those, who do not want to be politically active, might be motivated to participate otherwise. Civic education would be a key here, but as the example of the Czech Republic shows, setting up the proper framework is not easy. According to Husak, it has been a long-standing debate in the Czech Republic, and while many strategies and concepts had been developed by that state, the policy cycle did not move further: no institution was set up and no state resources were allocated to support civic education. Overcoming this situation where people feel left alone, without the sense of real impact will be the biggest challenge, in his view.

While active political participation is low, the trends of participation have been changing in the recent years. Direct action became more relevant especially among young people who use new forms of participation more frequently, said Dániel Mikecz, Junior Research Fellow at Institute of Political Science of the Hungarian Academy of Sciences and Research Fellow of the Republikon Institute. These new forms and fora of participation blur the private and the public, create lose digital networks, where individual collective action can take place. In these instances people participate by individually engaging in the same activity without any institutional backing and reliance. These new patterns generally do not bring about any institutional consequence either, therefore it is a legitimate question whether we can still talk about political participation here and whether there is post-institutional political action. While social media can empower citizens, it also has its limits: it generally moves actions from a public to an emotional, performative space, but it is often not followed by an engaged debate about the subject. Social media for sure socializes, but we are not sure toward what, concluded Mikecz.

The trends of political and civic participation have also been changing in Ukraine: according to the results of a fresh opinion poll conducted in November 2015, personal willingness to participate in the work of the civil society has increased in Ukraine since the Maidan protests, said Maria Zolkina, Research Fellow at the Democratic Initiatives Fund. Volunteering has been on the rise, horizontal links creating a community became stronger, and indeed trust in volunteers, the church, volunteer battalions has increased. At the same time, trust in the president, the prime minister and the parliament decreased. The only state-related institutions in which people trust more now are the army and public media. To rebuild trust, the delivery of reforms (especially in areas prioritized the most by the public – anticorruption, law enforcement) will be key, said Zolkina. While the volunteer movement is unprecedentedly strong, it cannot substitute the state, she noted.

With this event, the Center for EU Enlargement Studies has launched a series of discussions around various aspects of democratic change in order to study the phenomenon of social transition and how democratic values become embedded in societies in transition. The discussions are organized in the framework of the project entitled “Frontiers of Democracy: Embedding Democratic Values in Moldova and Ukraine”, but their scope of enquiry reaches beyond these two countries and encompasses democratic change in the wider Central and Eastern European region. The project is supported by the International Visegrad Fund and is part of CEU’s “Frontiers of Democracy” initiative. It is implemented in cooperation with EUROPEUM in the Czech Republic, the Foreign Policy Association in Moldova, the Institute for Euro-Atlantic Cooperation in Ukraine, the Kosciuszko Institute in Poland and the Research Center of the Slovak Foreign Policy Association.

Program of the workshop