Event Report: "Turkey and the European Union: Problems and Prospects" 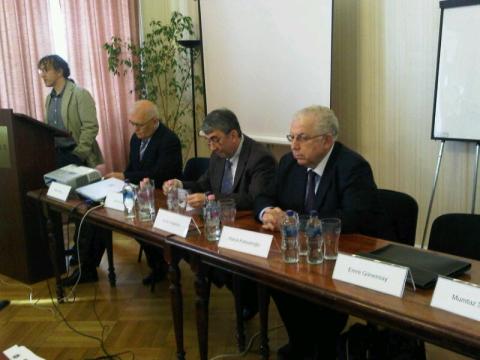 On 14 April 2011 the Center for EU Enlargement Studies (CENS) at CEU hosted a one-day conference entitled "Turkey and the European Union: Problems and Prospects" organized jointly by the Hungarian Europe Society and Economic Development Foundation (İktisadi Kalkınma Vakfı — İKV). The conference focused on Turkey’s current relations and accession process to the EU, particularly during the period of the Hungarian Council Presidency.

Morning Session: Turkey and the EU: Together for a Common Future?

István Hegedűs, Chairman of Hungarian Europe Society, stated in his opening speech that Hungarians are supporting the Turkish membership in the EU. Turkey is preparing for the outcome of the general elections which will raise the question whether Turkey remains on the European track. However, the current Hungarian history shows that the EU membership does not guarantee stability. He also highlighted current issues of importance such as how the Treaty of Lisbon will affect the EU, the future of economic governance, political changes affecting the globe (especially in North-Africa) and energy.

Kemal Gür, Turkey’s Ambassador to Hungary, stated that Turkey has been a part of Europe and European institutions for more than a century now. Turkey, once “the sick man of Europe, not the sick man of Asia”, has 60 % of its trade with Europe and most of its cultural relations with EU members. He expressed his wish that the negotiations would be finalized soon, making Turkey, a bridge among continents, civilizations, cultures, religions, energy resources, a part of the EU. The ambassador stressed that there is no need to erect a "Berlin Wall" on the edges of Turkey’s borders with the EU.

Péter Balázs, Director of CENS, stated that the inclusion of Turkey in the EU remains a challenge due to the current enlargement fatigue. Turkey is one of the most important Mediterranean countries, it is also the only country which could not find a satisfactory relationship with the EU. Concerning the current position of the EU he raised the following explanations: (1) Crisis management. The EU is going through a serious time, finalizing its constitution, engaging in a very ambitious enlargement drive; (2) EU is digesting the latest enlargement and the Lisbon Treaty; (3) G20, which is a “new and a bit unstructured phenomenon”, exerting high pressure on big Member States. Turkey is in the waiting room for the EU membership and it is an equal partner for the four big Member States. He also pointed out that with time, politicians change and new generations with new attitudes emerge. Last but not least, he stressed the sensitive geographical location of Turkey between the EU, Russia, Balkans, Central Asia, Middle East and the Arab world.

Haluk Kabaalioğlu, Chairman of IKV and Dean of Yeditepe School of Law, mentioned that in 2005 all Member States unanimously decided about the start of accession negotiations with Turkey. If the EU is a serious actor in the world and wants its word to be taken seriously, it needs to conclude the negotiations. Rejecting a country because of its religion is a message to the outside world. Muslims from other countries are closely watching Turkey’s relations with the EU.

Mümtaz Soysal, former Minister of Foreign Affairs of Turkey, shared his belief in the necessity of Turkey belonging to Europe. However, he stated that due to certain prejudices in Europe, Turkey will never be admitted to the EU. In order to create better relations between the two entities, he prefers Turkey adopting certain parts of European integration, similar to Norway, or re-negotiating its customs union with the EU, and stop knocking on the EU’s door for membership.

Emre Gönensay, former Minister of Foreign Affairs of Turkey, who was part of the team preparing the membership application in 1987 said that Ankara knew already at that time that it would not be admitted to the EU but believed that it could benefit from aid for preparations. Concerning the Turkish foreign policy, he believes that Turks have cultural, social and historical relations with the neighbouring regions and this gives them a better chance to solve problems in these regions. It is unfortunate for Turkey having one foot in the East, another in the West, trying to come to terms with both sides. In his opinion, Turkish foreign policy is a defensive policy rather than an active one, attempting to keep both sides together.

Nedret Kuran Burçoğlu from the Yeditepe University in Istanbul delivered a speech on the formation and transformation of the image of Turkey in European countries and shared his reflections on EU-Turkey relations from a historical perspective. He argued that the images of the “others” influence our attitudes, both positively and negatively, they very often turn into stereotypes, and we use them both consciously or unconsciously in our daily lives. European identity, the creation of Europe is partly shaped against the Turks and this has played an important role during Turkey’s integration process to the EU, shaping decision-making in Europe as well. László Csaba, Professor at the Department of International Relations and European Studies, CEU, and László Jankovics, Economic attaché at the Representation of the European Commission in Hungary, were also part of this session.

Feroz Ahmad also from the Yeditepe University challenged the idea that Europe has existed for a long time, saying that it was not Europe, but Christendom that existed for a long time, which can be compared to the existence of Muslims on the other side, not Turks or Arabs, not nationalities. The idea of Europe is a product of the modern age. One should also remember that the Ottoman Empire was not a Turkish empire although many see it this way. He cannot predict when Turkey is going to be admitted into the EU, if one day Europeans decide that Turkey should be accepted, it will be for its military might.

Anita Orbán, Ambassador-at-large for Energy Security, Hungarian Ministry of Foreign Affairs, stressed the growing need for imported energy, especially in gas in Europe until 2020. She argued that Turkey is a key country in the southern corridor, aspiring to become a key energy hub. Turkey has already concentrated its efforts on the realization of East-West energy corridor. She highlighted the importance of Nabucco which took a leap in 2010 in agreements and declarations, awaiting yet another important decision in October 2011. ITGI, another project is awaiting decisions to be taken by Italy, Greece and Turkey. These projects are important not only for Turkey’s own consumption but also for diversification of energy routes to Europe.

Tuncay Babali from the Turkish Ministry of Foreign Affairs warned that public opinion polls show that enthusiasm among Turkish people and bureaucrats is declining. Turks are disappointed by the double standards applied to them. Croatia has started accession negotiations along with Turkey and it is about to become an EU member, while Turkey could only open 13 chapters and close a single one. The chapter on energy has still not been opened with the EU due to the issue with Cyprus. Turkey deems energy security as a pivotal element in its relations with the EU. However, energy projects such as Nabucco are not meant to free Europe from dependence on Russian gas but they are enough for diversification. Political and economic decisions are becoming harder when Ankara does not know whether or not it will become part of the EU.

Marc Maresceau from the Ghent University, Belgium, in his talk pointed out the uniqueness of the Ankara Agreement. The preamble refers to the accession twice. The agreement was an integration agreement, foreseeing the establishment of a customs union. Other peculiarities in the Agreement include provisions referring to “discrimination based on nationality…to be prohibited,” other references to EEC Treaty, which is something extremely rare to be found in bilateral treaties the EU has concluded. He stated that while national governments have a restrictive approach to the meaning of the Agreement, the Court has an integrationist approach. On the contrary to the interpretation of national courts and governments, it has interpreted the Ankara Agreement the way it has approached cases in the intra-EU context.

Gábor Iván, Hungarian Ambassador to the Republic of Croatia, opened his speech referring to the EU-Croatia negotiations, pointing out Croatia’s intention to join the EU as the 28th member state. He strongly emphasized the fact that Croatia is progressing in the right direction and has reached the final stage of its accession negotiations, opening 34 chapters and provisionally closing 28. He underlined that the remaining challenges, which refer to chapter 23 (reform of the judiciary), fighting corruption and organized crime and securing the respect of fundamental rights, are still to be complied with the EU requirements. He added that Croatia will have a clearer picture about the possibility of concluding negotiations by June after the EC’s interim report on Chapter 23 is published.

Leyla Tavsanoglu, journalist from the Cumhuriyet Daily Newspaper in Turkey complained about the number of imprisoned journalists in Turkey and Brussels being deaf on their complaints. In her opinion, the EU remains silent because it is not sincere towards Turkey. She concluded her talk with a popular saying “they are the community, we are the market”, implying that the EU is only interested in Turkey for economic exploitation.